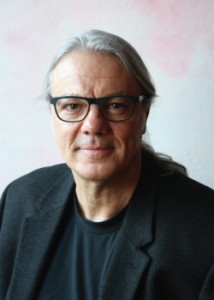 Errol Lee Fullen was born in Camrose, Alberta and attended the Alberta College of Art and Design, where he majored in printmaking, drawing, and painting. Errol went on to complete his Bachelor and Master of Fine Arts degrees at the University of Calgary, later teaching at both institutions until becoming a full-time artist.

Errol exhibits his work locally and internationally. He is best known for his landmark public and private commissions of paintings and sculpture.

PROFESSIONAL
Errol Lee Fullen has maintained a professional art practice for over 40 years. In addition to creating solo collections, Errol has worked extensively with architects, designers, consultants and collectors on public, corporate and private commissions. Although he works predominantly as a painter, Errol has abundant experience with a variety of media.

Teaching has played a large role in Errol’s art experience. From teaching at a post secondary level at the  University of Calgary and the Alberta College of Art to being an educator through many art societies and partnerships. He has created and facilitated workshops and continues to be an ambassador of arts and culture through all of his involvements.

Triangle Gallery of Visual Arts, Board of Directors

May 1989, Who’s Who Show. Alberta College of Art Calgary, Alberta.